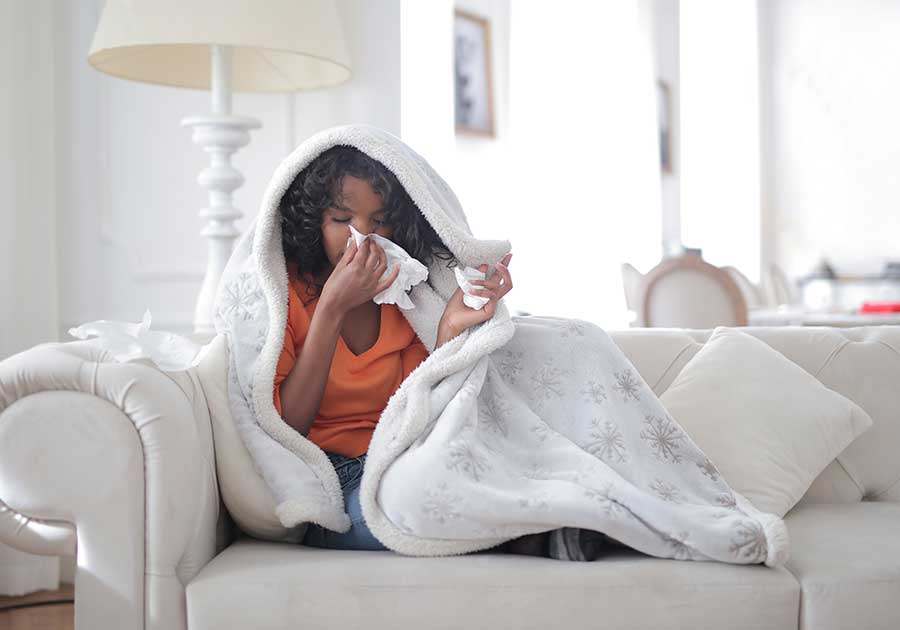 About 90% of women report getting Pre-Menstrual Syndrome (PMS). PMS is a condition that affects a woman’s physical health, emotions and behavior especially just before her menstrual period.

PMS symptoms typically start 5 to 10 days before menstruation, and go away just after the menses start.

In this article, we’ll explore the causes and how to manage and treat Pre-Menstrual Syndrome.

Even though the exact mechanism of what causes PMS has never been described, doctors believe it’s related to both sex hormones and serotonin levels at the beginning of the menstrual cycle.

Levels of estrogen and progesterone increase during certain times of the month, which can cause mood swings, anxiety, and irritability.

Serotonin levels affect mood. Serotonin is a chemical in your brain and gut that affects your moods, emotions, and thoughts.

Around 14 days in your menstrual cycle, ovulation occurs (when a mature egg is released from the ovary).

The empty follicle that has nurtured the egg forms a corpus luteum, which produces high levels of the hormone progesterone and some oestradiol. These prepare the womb for pregnancy if conception has occurred. If the egg is not fertilized, the corpus luteum breaks down, and the production of progesterone and oestradiol begins to fall.

This starts about a week before the next period, which coincides with Pre-Menstrual Syndrome.

Pre-Menstrual Syndrome is also linked to lifestyle factors such as bad diet, stress, and smoking which cause chronic inflammation. Inflammation causes PMS because it impairs the health and resilience of hormone receptors, which makes you hyper-sensitive to the normal rise and fall of your hormones.

When estrogen levels fall, serotonin levels also drop in women with PMS. Lifestyle factors like bad diet, stress, and smoking cause chronic inflammation, which can cause PMS.

We can classify these as physical or behavioral symptoms:

What Are The Pre-Disposing Factors Of PMS?

Some factors common in women with PMS include: Get A Free Expert Consultation

Navigating supplements without professional help can be expensive and dangerous. We are here to help. Because the exact cause of PMS is not clearly understood, most treatments revolve around treating the symptoms.

Since there’s a definite link between hormonal changes and PMS, stabilizing hormonal imbalances may be successful in complementing regular treatment.

If your PMS is mild to moderate, these changes should reduce PMS symptoms:

Role Of Nutritional Supplements In PMS Health supplements are not evaluated the same way by FDA like other drugs in clinical trials. For this reason, your doctor may not recommend supplements to relieve PMS symptoms. However if you’re taking medication, talk to a health professional in case of rare interactions.

Studies show that calcium can help reduce some PMS symptoms, such as fatigue, cravings, and depression.

A calcium supplement is recommended for PMS.

Vitamin B6 can help alleviate PMS symptoms such as moodiness, irritability, forgetfulness, bloating, and anxiety.

Magnesium may help relieve some PMS symptoms, including migraines.

Studies show that taking a supplement with 1 to 2 grams of polyunsaturated fatty acids may help reduce cramps and other PMS symptoms.

Researchers believe that V. agnus-castus works by decreasing levels of the hormone prolactin. This helps rebalance other hormones, including estrogen and progesterone — thus reducing PMS symptoms

In one study, women with PMS took V. agnus-castus during three consecutive menstrual cycles. In total, 93 percent of those given V. agnus-custus reported a decrease in PMS symptoms.

This supplement is available at Reed Naturals here in Kenya.

DIM supplements have quickly gained steam as the supplement of choice to reduce premenstrual syndrome (PMS) and menopause symptoms. They are also used to treat acne, hot flushes, weight loss, thyroid disorders and menopause among others.

DIM works by reducing the levels of “bad estrogen” and raising “good estrogens”. DIM is a plant compound derived from cruciferous vegetables (e.g. cabbage, broccoli, cauliflower, etc.). It has picked up steam as a go-to treatment for maintaining estrogen and testosterone balance, and as an anti-cancer agent (24, 25). It’s known to treat a variety of issues such as

To get the maximum benefit of DIM, you’d need to eat a kilo of these vegetables every day (26). If your PMS symptoms are too severe, you may need to see a doctor. A small percentage of women suffer from premenstrual dysphoric disorder (PMDD), which is a severe form of PMS.

A doctor may prescribe hormonal contraceptives that suppress ovulation.

PMS continues to be a big problem for most women. While some women experience symptoms that can interfere with their daily lives, most women can treat PMS with diet and lifestyle changes as well as taking health supplements.

Women with severe PMS symptoms should talk to their doctor in case they have more serious underlying issues.

Join our elite savers VIP club and get a 10% coupon.
Hurry up! Offer valid till stocks last.